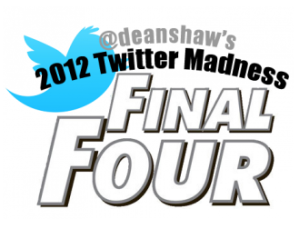 Phil Buckley (@1918) made this & I am shamelessly using it Goddamit.

It was just a few weeks ago that 64 hopefuls enter the arena of Twitter competition in the 2012 @deanshaw Twitter Madness Tourney. From longshots to titans, from locals to global icons, each held of dream of walking away with the prestigious title of Twitter Madness Champion. This honor sits alongside the Green Jacket, the Oscar, and a Nobel Peace Prize as one of the world’s most revered honors. Last year, a country bumpkin named @spikejones from Austin came from virtual obscurity to become the competition’s first champion. On Wednesday (or whenever I can get to the results – I’m friggin’ busy people), a new champion will join him.

And who will vie for this most cherished title? Well, let’s take a look at the final four matchups…

@jimsterne v. @1918: Phil (@1918) Buckley continued his unlikely and inspired run into his Final 4 matchup against web analytics wonderman @jimsterne. Phil ignored the Las Vegas bookies, who offered him at a bazillion to 1 odds, and powered his way into the Final 4 doing what he does best; offering a mix of compelling SEO-focused marketing links, original content on his blog, and promoting and engaging with local social media birds of a feather. Ya see Phil doesn’t pine to be a small fish in a big pond, preferring to be a quite massive fish in our humble Raleigh-Durham pond. I swear there isn’t a marketing related event in the Triangle that Phil isn’t smack dab in the middle of. I heard he’ll even venture to Carrboro if the hippie tree-huggers promise not to hound him for autographs.

Perhaps the most steady-eddie competitor in this year’s Tourney, Phil stuck with his tried and true game plan starting with cordial note to his adversary @jimsterne. Frankly I would have preferred some good old-fashioned trash talk but Phil always takes the high road on these types of interactions. He followed up with some of his usual high quality SEO content but lest you thought he was a one trick pony also added some mad design skillz to the competition, designing the Final Four image you see here. I’m pretty sure it was Phil’s way of saying “Dean, your images suck, get a load of this”, but I’m not gonna take that personal (cough…..point deductions…cough). Finally, he was able to slip in the word ‘bacon’ in a couple tweets scoring him a quick 76.24 Twitter Madness points. In short, Phil put up a great score and dared @jimsterne to beat it.

That brings us to @jimsterne. The heavy favorite coming into the matchup, Jim came out swinging starting with a congenial acknowledgement of his opponent Phil, scoring major points by sharing a link to Phil’s blog, despite the increased visibility and influence it was sure to afford Phil with the Sterne followers. In addition to his regular sharing of web analytic content (this hits the bulls-eye of my professional heart and soul) he tweeted some things he probably wasn’t even aware would contribute to his Final Four success.

First, he tweeted this:

Two things stuck out here:
1. @mktgdouchebag was actually a competitor in last year’s @deanshaw Twitter Madness Tourney Final Four, seeing his name come up at this point in the competition reminded me of the excitement of last year’s tourney as well as just how small this social media world is.
2. I LOVE that freakin quote cuz I think its soooooo true. Let’s get pissed off America and make sh*t happen!

Next, he tweeted this:

Little did Jim know that I spent 12 years of my life in T.O. (as us Torontonians call it) and the image of that skyline reminded me of how much I love that city. Seriously folks, if you’re on the fence about this emetrics thing, just go. It’s in freakin’ Toronto. And stop by Lee’s Palace and watch some sweaty, local alternative rock. They may say something about me skippin’ out on a tab but they’re definitely talking about a different Dean Shaw.

I heart you Toronto

Why yes I do call myself an analyst and yes I did buy 10 lottery tickets. Eff you @jimsterne!
(Note: I’ll be at work Monday so it’s fair to assume that I didn’t win the lottery and Jim “may” get the last laugh here)

Running scared from @1918’s stellar performance and continuing his Venn diagram fascination he threw this is the ring: 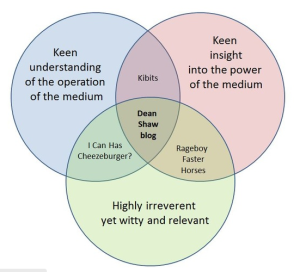 and so as not to look like he was pandering to the judge, he then offered a candid and telling opinion of my tweeting prowess:

(p.s. they turned down my order explaining my tweets weren’t worthy of such fine parchment)

Not content with questioning my acumen, he once again poked ‘retargeting’ fun at himself:

Finally, in an attempt to bring some culture to this sordid event, he offered up his prose in the form of a limerick:

Sadly, he lost 746 points for this as it was quite simply HORRIBLE, and embarrassed leprechauns everywhere.

In the end @1918 was very strong, but @jimsterne was stronger. But be warned 2013 Twitter Madness Tourney competitors, the secret is out and look for @1918 to be a favorite in next year’s spectacle

@jowyang v. @kaimac: It’s obvious @kaimac wasn’t listening to the sage counseling I gave @RudiShumpert at the conclusion of Elite 8 matchups so let me freakin’ repeat….

“Folks, let me be clear on something. When you get to the Elite 8 of the @deanshaw Twitter Madness Tourney and you don’t tweet on the first day of the matchup you disrespect me. But you not only disrespect me, you also disrespect your country, the Corps, and your Mama.”

I don’t know how clearer I could have been on this. I mean anyone who speaks English could not….wait a minute…@kaimac is Irish. I mean right off the boat smelling of beer and potatoes Irish.* Could it be that writing these posts in English as opposed to @kaimac’s native Gaelic has caused confusion for the young lad? If that’s the case, then I offer this to @kaimac:

I’m glad I cleared that up.

On a positive note he did come strong on day 2 with a tweet offering last year’s champ @spikejones advice on serving me with a restraining order. I need that kind of discipline now and again.

As for @jowyang he seemed to find his groove with a variety of Twitter goodness including (but not limited to):

• Comparing Apple fanboys to potato crazy Japanese monkeys.
• Genetically modified goats mutated with Spider DNA to create spider webs in milk.
• Theorizing that our grandkids will laugh at our ‘paper’ and ‘metal’ system of currency
• A cute and boyishly naïve belief that Google+ has a hope in Hell (even though his own blog has no +1 capabilities)

* I don’t know this to be fact and it may be a gross mischaracterization and stereotyping of @kaimac and Irish people everywhere. Then again my Irish friend ‘Gus-Boy’ has been in America for almost 20 years and does, in fact, still smell of beer and potatoes.

So there you have it, 64 competitors whittled down to 2 battle worthy competitors. To quote Denver Bronco quarterback Peyton Manning (ok that sounds weird), “IT’S ON LIKE DONKEY KONG!”

Let’s have at it boys!